Yay, it's Five on Friday time and that means it's, well, Friday! I kind of feel like this. 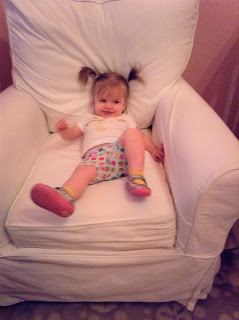 5. The latest episode of Interior Therapy had the husband giving me a little side eye. The couple were living in "her" decorated version of the house that leaned very much to Mark Ryden. And by lean I mean was totally covered in it and lots more of that style of artwork. She also had a lot significant number of unusual pieces that I had some skepticism about including stuffed rats and clown portraits. Yikes! Now, I admit I like an occasional doll head as much as the next person  and kind of adore Mark Ryden but she had gone a little overboard. Since we watched it, I've been rethinking the entire home decorating/knickknacking I've got going on. I will say that someone with a "toy collection" a la Star Wars hoarding better not look too hard at me. Side eye back to the husband there.

4. So ignoring #5 where I swear off all questionable art and excessive item displaying. I kind of really really want these. Our antiquing trip set off some kind of dormant pottery collecting gene. I'm on a definite 30's and 40's pottery kick and have almost started a collection for Sophy. I have not for a few reasons.

3. I've been seeing these awesome Valentino pumps all over the intranets. Greatness. So we have to suspend our disbelief that a) I wouldn't immediately break an ankle. And, b) that I would spend nearly $1,000 dollars on shoes. After all of that, these are fantastic! Perfect with some boyfriend jeans and a cardigan for casual with an edge work outfit.  I also have to get beyond them being called "Rockstud". That's just... ugh.

2. Ok, since I've agreed not to hoard on behalf of my toddler daughter, I'm contemplating merchandising her things in some fun ways. I love these crates. This book wall is on the must list.

1. And I've decided I'm kind of screwed since I have a "vignettes" board that would induce nightmares in Jeff Lewis and my husband.