I did a ton of baking this weekend since we actually had a few social functions including a baby shower for my friend Colleen and a going away party for Suzanne who is moving to Austin to pursue her dream of opening a coffee house. Yay!

Since we did have a lot of weekend plans I haven't gotten those photos off the camera but I do have these as placeholders from past weekend endeavors.

Suzanne's going away potluck called for some tasty goodness that is quiche. I made a few options since Suze is a vegetarian and Ann is gluten free. Ann got her own personal quiche sans crust. 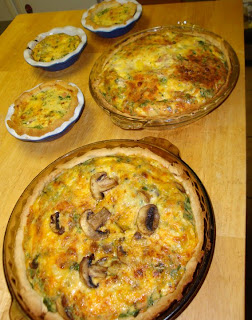 After the return from New York and the delectable Balthazar, which I previously raved about here, I wanted to try and recreate the experience for Rolland. Turns out, not even close but he enjoyed it. 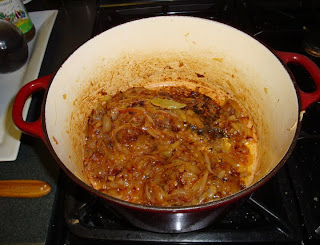 Finished soup mine and a pic of theirs. 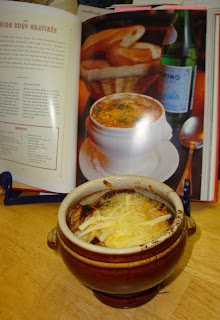 I mostly enjoyed this.

I know it's odd, but we recently started watching the series Bones (which is awesome) but I love the jewelry in the show. I'm sure the idea is that it's all collected via anthropological trips but mostly I end up thinking "I could make that". This is one of the pieces I first made. Loving the mix of pearls, chain and medals. 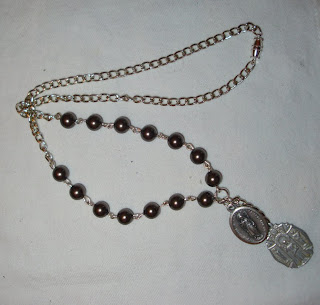 Beads I picked up in Santa Fe and strung with smokey quartz. I love that the stones are warm after wearing. 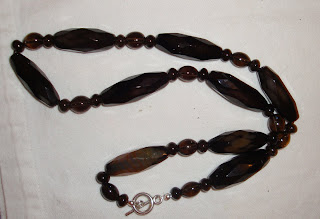 This one was actually fairly tricky to string all the tourmaline with the correct lengths. I cheated a little with the silver beads on the end. I really like how it turned out but am a little nervous to wear it much. I definitely don't want to restring this! 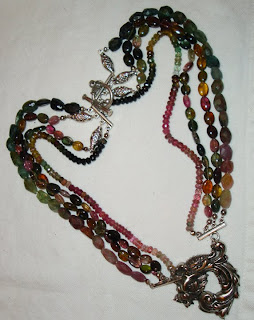 This is one of my favorite purchases from the recent Santa Fe trip. It's a pretty good sized "cocktail" ring. I tried it on a few times and even walked away with purchasing but apparently the puppy love (could not resist!) was clear and Rolland got him for me. 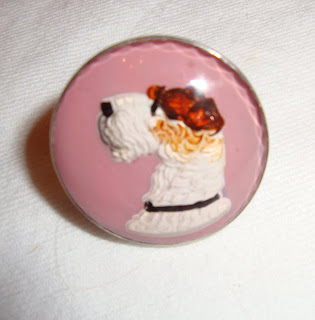 We went to the flea market on Saturday instead of the usual farmer's market. Hubby was only going to do one! Turns out, this was an excellent choice since lots of goodies were found. Die cut greatness, a few more paper goods, an awesome cream cornucopia vase for $5 bucks plus lots of others Rolland was shocked to discover I was dragging home. 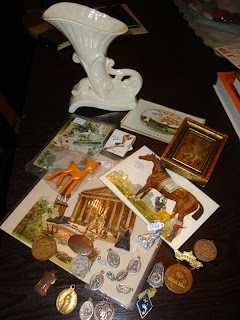 Love this pin; even if the folks at work were a little perplexed by the deer pin. How could you not love her?! 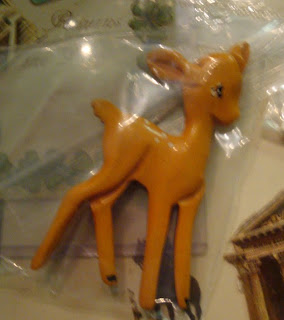 Another favorite find is the Big Tex charm. Anyone familiar with the Texas State Fair will recognize him. 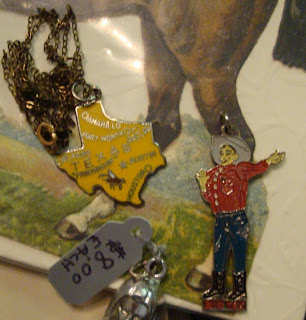 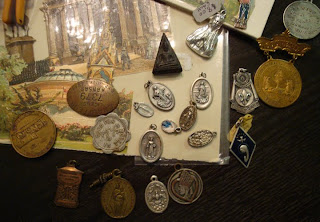 This Saturday, back to the Farmer's Market! Luckily the flea market is only monthly. Gives me time to save up the allowance.
Posted by Amy Huff at Tuesday, April 20, 2010 1 comment:

So we managed to check out a couple of Dean & DeLuca's which were awesome. These were incredible from the prepared foods, baked goods and stocked items I wanted just about one of everything. I managed to resist trying to figure out how to get these gorgeous chocolates home where I would promptly try to decide the best way to preserve them. 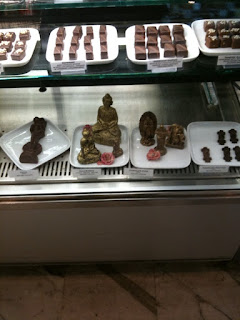 We all gave the French Onion Soup at Balthazar's thumbs up! And the pots de creme was just out of this world. 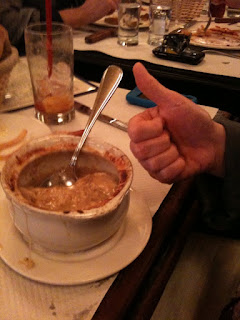 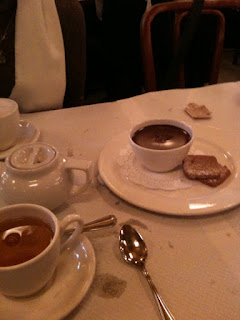 ABC Carpet and Home was almost too much. Floors of modern, antique and mix/match of everything else you might ever need to furnish 3-4 homes across the world. I coveted most all of the crystal chandeliers along with a few metal outdoor seating sets. Settled with a few pics instead. 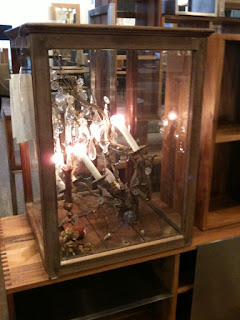 Along our walking tours we stumbled into Magnolia Bakery for a little sweet and were not disappointed. These cupcakes were luscious. 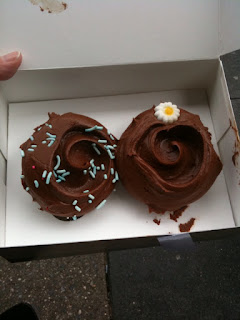 This makes the last of the this spring's NY pics. I'm still amazed at how much I loved it and could definitely see myself spending a lot more time there.
Posted by Amy Huff at Saturday, April 17, 2010 No comments:

I still haven't caught up from the busyness that was March. April has also been fairly packed with the to do list and social stuff which is fun but I think I'm wearing out a little. This weekend has been spent mostly doing nothing despite the good intentions. Next week, back to the "to do" lists. In the mean time, here are a few pics of the girls weekend in New York. It was greatness and I think I could spend time there pretty regularly. 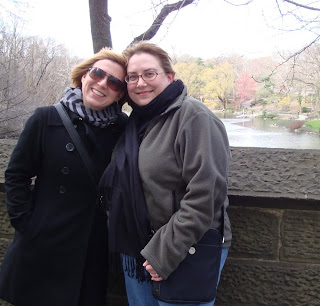 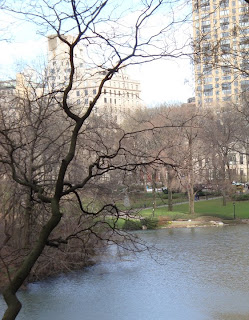 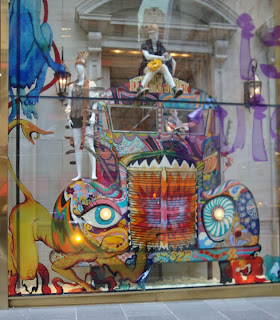 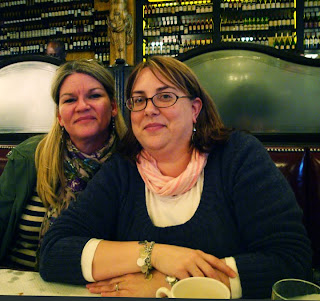 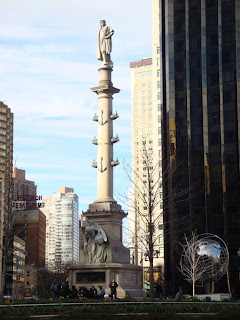 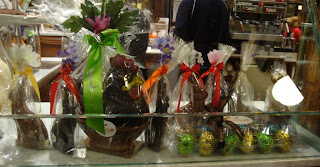 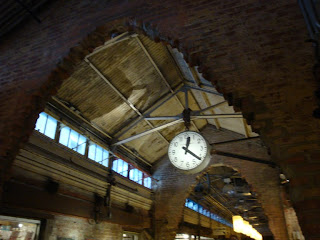 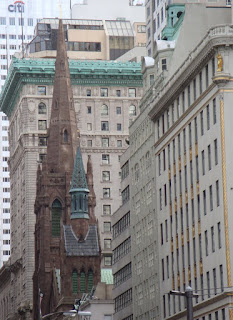 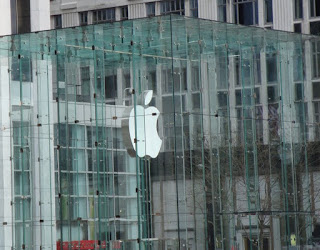