I worked on this piece for a few weeks and it's finally finished and up in our newly painted entry way. I had originally been inspired by this and this.

The roof tiles came to me first so after prepping the large canvas and getting a few base layers on I started with the pebbles. A lot of pebbles were required so I was happy to finally use up some of the supplies I've stashed for a couple of years now. 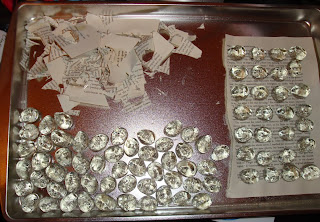 Next, basic painting and shaping of the house. 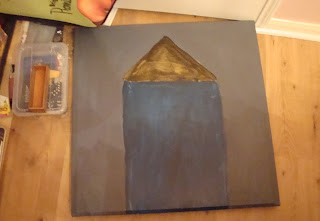 I forgot to document the layers in between. The edges of the piece are covered in telephone pages that I glued down then coated in a bunch of layers of paint. I covered all the edges around the frame to finish it off. I like how in a few places the names and numbers peek through. I also liked the texture and color of the old butterscotch dominoes.

I also started adding in some of the fun doodling/graphic elements. My version of a cherry blossom crossed with a dogwood. 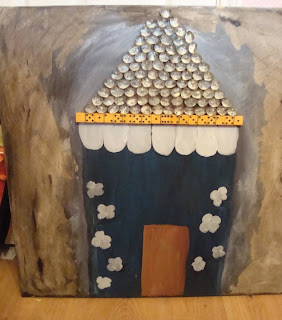 Final touches including a door knob and a lot of layers of the charcoal pencil. Now, the piece hangs in the entry way of the house and I kind of love it. 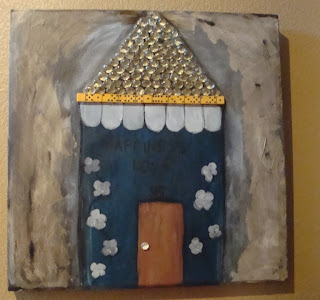 Turns out Springfield, Missouri is much more interesting than I knew and now has cool art like this in their front yard. 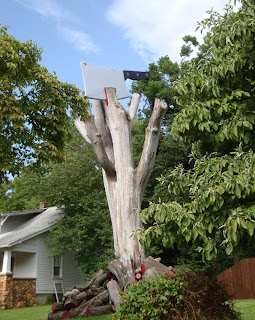 I made Rolland drive by 3 times just to double check that was what we were really seeing then I made him wait while I took several pics (this was the best). I'm still wondering what the hell the crane guy was thinking when putting that together.

Other super cuteness found in Missouri is the cutest nephew ever. And his octobunny that I had no idea would be such a hit. I should've caught on to all the chewing options but missed it entirely. Rolland however know it would be a hit. 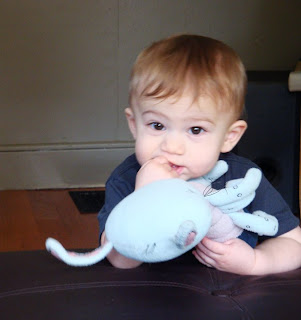 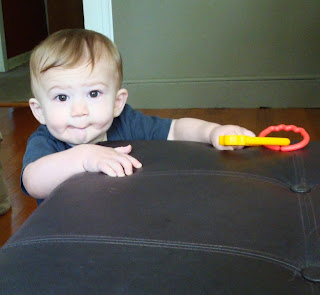 I forgot to take a pic of his parents (my brother and sis-in-law). They too are pretty cute.
Posted by Amy Huff at Wednesday, July 28, 2010 No comments:

It's my hubby's birthday today. We celebrated with steak dinner last night, Despicable Me and Chipotle today. It's total excitement at our house but I hope he had a great birthday weekend. 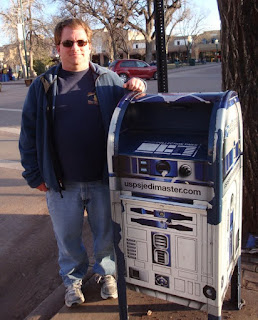 We packed up and hit the road this weekend to visit this super cute little guy. We haven't been able to get to Missouri to see our new nephew, or his parents, and I wanted to get in some snuggle time before he went off to college! 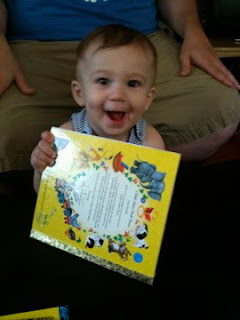 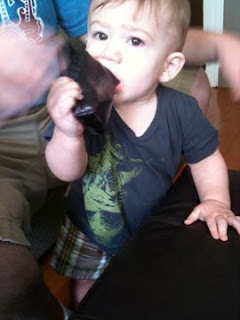 On the way back we went further south to Eureka Springs for a quick stop before heading back west to Texas. I also spent lots of time playing with the hipstamatic app for my iphone. I went a little nuts but I'm loving all these picks. 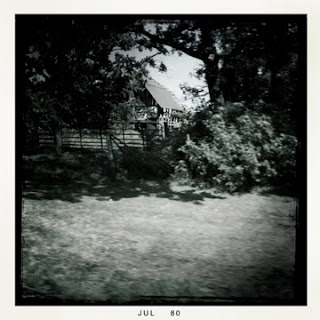 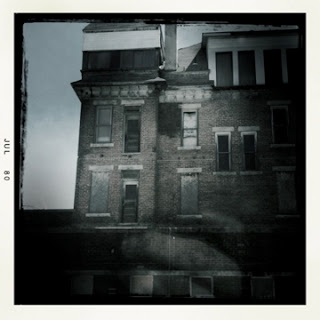 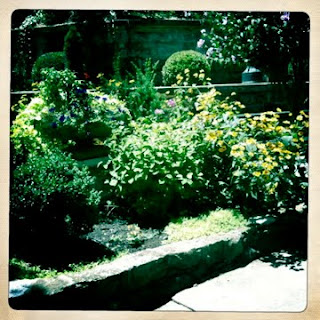 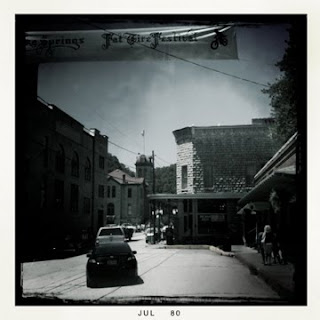 Has been pretty busy but at least it's enjoyable busy. I've been hanging out with girlfriends and the hubby. The last couple of weeks have been movie heavy but this weekend we worked in a movie and a house project. We went to see the Last Airbender at the fancy theater in Allen. The theater was awesome but the movie wasn't. It was actually fairly horrible. The sliders and reclining seat made up for most of it.

The house project has been painting the entry way and rehanging our bookshelves we have tucked into the entry arch. They were starting to become slightly precarious but after Rolland did some serious planning and a lot of prep in the garage for most of the day they are back in place and sturdy enough to handle the heavy duty paperbacks. The benefit of a Texas summer is the new coat of paint dried in about 5 minutes!

Josh and Brent are in fact the owners of Beekman farm which is a gorgeous farm in New York. The scenery and house are lovely but I'm not sure that the animals and Farmer John aren't my favorites.

Holiday vacation and a lament about kids nowadays...

I took advantage of the long weekend with Monday being a holiday to take last Thur & Fri off as well stretching the vacation time into as much as possible. It has been lovely. I spent lots of time with girlfriends, the husband and the puppies. We caught up on movie watching, magazine and book reading but mostly just enjoying not working and not running around like a crazy person. I have also slept past 8am every morning. A fairly big deal for me.

On the 4th of July I actually went to brunch and saw SATC 2 with a girlfriend. Hubby and I had junk food and watched District 9 as fireworks displays around here are a madhouse. Not a traditional 4th but relaxing none the less. But, back to the actual holiday.

I was shocked at how many kids and families were in the mall on the 4th of July. While it's true that I have pretty much always hated the heat and wanted to spend as much time swimming as possible, I loved the summer. Summer was spent mostly in Kansas with my grandparents and cousins. We had lots of large family gatherings over the summer and none were bigger than the 4th of July extravaganza. Fireworks were purchased, often before with a few emergency runs to the stands as the poppers and snakes got low, tons of food was made and all of us kids were outside. Seriously, if we went in for anything but the bathroom or a drink there was an adult somewhere telling us to get back outside.

After a dinner with lots of hotdogs, hamburgers, homemade ice cream and soda we all started getting antsy for the big show. My grandparents had a huge side yard of lawn where we gathered around the edge while my Dad and uncles lit the larger fireworks. As we got older we got to do a few of the bottle rockets but all the really good stuff was reserved for the adults which was fine by me. Once when I was really little I grabbed the wrong end of the punk burning my hand making me slightly nervous about the entire lighting procedure (also, I have never figured out how to work a lighter. Really.) Anyway, I loved sitting in the lawn chairs with my Mom and the rest of the family watching the show. There was some serious hilarity that ensued as grown men were chased down the street by fireworks (true story), fireworks that completely fizzled and some that were dazzling for the fairly low end firework offerings available pre-internet around Eureka, Kansas.

All of this is a fairly lengthy explanation for being incredibly sad at all of the kids that now think celebrating the 4th of July means watching cartoons in the air conditioning. I know I shouldn't be narrow minded in making my relatively idyllic 4th of July memories those that everyone should have but they are what I think of as being quintessentially small town American. Luckily, those folks in Kansas still know how to party.
Posted by Amy Huff at Monday, July 05, 2010 No comments: