I didn't get much done this weekend beyond picking up the house, putting up the Halloween village and doing a bunch of reading. I'm re-reading the Southern Vampire novles by Charlaine Harris and they still rock! These are the basis for the new series True Blood on HBO by Alan Ball (Six Feet Under) and I'm hooked. Sunday's is on the TIVO waiting for us to get home tonight since I missed it yesterday. I was catching up on the books and contemplating an early night but I got sucked (no pun intended!) into the 2nd book and was up until midnight. 5am came a lot sooner than I was prepared for!

This weekend we've got a lot of plans with a work function for hubby on Sat, plus the Cottonwood Arts Festival then Sunday I've got tickets for us to see the King Tut exhibit at the Dallas Museum of Art! I am beside myself excited since I've wanted to go see this exhibit for years. Years! We tried to see it in London but the lines and tickets were both impossible. But this time, Sunday at 8am we're in like Flynn! Then a trip to the Farmer's Market for fruits, veggies and pumpkins for the wagon on the front walk. It's fall and the weather better just catch up to it right now!

I know I owe you guys a bazillion and 1 pics and I'm going to get to it this week right after I watch True Blood and Mad Men...wait, was last week the season finale? If so I have free time, right after watching Feasting on Waves. Not as good as Feasting on Asphalt for me but still pretty awesome! Also, on a slightly non television but food related note, I've made reservations for us at Bouchon when we're in Vegas in two weeks! Woo hoo!
Posted by Amy Huff at Monday, September 29, 2008 3 comments:

This post really turned my Friday around. Yay Will Allen! I hope this inspires you to venture out during this gorgeous fall season to a farmer's market and make a pot of stew, chili, vegetarian lasagna... you get the idea. Also, buy a lovely bunch of flowers for home. I promise your day will brighten immediately when you catch a glimpse of the bright blooms.

Hope you guys have an awesome weekend!
Posted by Amy Huff at Friday, September 26, 2008 2 comments: 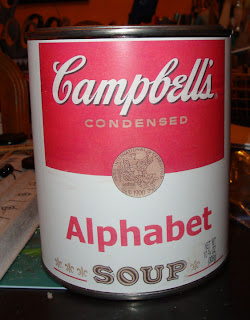 I'm a member of a charm swapping group and I got my first exchanges which are incredible. I'll need to spend some time this weekend getting some good pics. One of the exchanges was an alphabet exchange and I was able to join to fill in for someone else and am thrilled I got the chance. This is how the charms came to us! I can't wait to get all the charms on a bracelet but I thought the swap hostess went above and beyond with this one. That's just super adorable!
Posted by Amy Huff at Thursday, September 25, 2008 1 comment: 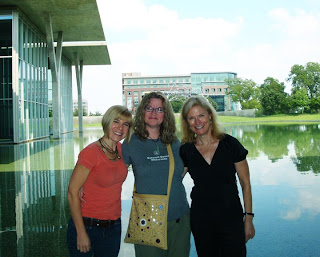 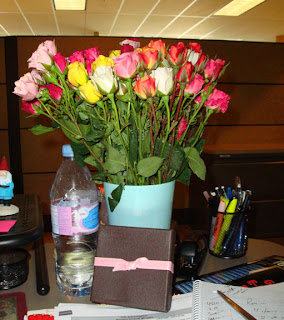 I hadn't really meant to be away from blogging for so long but we had family in town and then work was crazy so this is my first time to catch up in over a week. In fact, the week was such a wheels off week that the husband sent me these gorgeous flowers and chocolates as a little pick me up. It worked, I was in fact much perkier. I also had several comments including one in which she said the flowers looked just like me. I'm choosing to believe that's a compliment! :)
I had wanted to get some studio time in but mostly it was a busy weekend. On Saturday some ladies from work and I headed to The Modern in Ft. Worth, they've posed beautifully in front of the reflecting pool, and I loved the building but the main exhibit was not my favorite. I did love these amazing photos they had and some mixed media pieces that tied in with the photos.
We also visited The Kimball and sadly I was mostly left with the impression that they desperately needed more bathrooms! It was interesting to see some of the Impressionists work that typically is only seen in reproductions but the crowds made it almost impossible to see anything or read anything. It was very reminiscent of the Italian paintings room at The Louvre.
Otherwise, the only other thing I've been doing is reading several headache books including changes to my diet. So far so good but some of the choices I have to exclude are sourdough bread (which makes life worth living), chocolate and citrus! Uhm, this could be a problem. I just have to weigh the food option against the full blown migraine. I'm thinking I can reserve the sourdough panini, chocolate cake and lemon drink for a birthday!
Posted by Amy Huff at Sunday, September 21, 2008 1 comment: 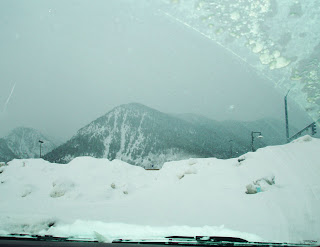 This is pretty much sums up the work day. It's just been crazy hectic and I've wanted to do nothing more than come home and play in my studio while watching Battlestar Galactica and listening to the puppies snore. Ah, the sights and sounds of home.
Instead, I've been increasingly busy and not overwhelmed but disconnected. I feel like I'm working on a million pieces to 10 different puzzles and it's driving me crazy. Typically, I like to rant and rave about my current project but the truth is I love them. They're like my babies and I'm heavily invested in all of them and want them to turn out perfectly. I'm resigned to this not happening but typically I'm really happy with all the effort and most of the product achieved. I love working with the super smart people in teams and having everyone work together to get it done. Now, it's more like a blind assembly line with everyone blindly handing off their portion to the anonymous person next to them. I'm a little fuzzy on next steps but to keep going in and working on the handoffs.
Is this a situation that can be helped with baked goods?
Posted by Amy Huff at Thursday, September 11, 2008 No comments:

I know that's exactly what you want to see when you visit a blog "bleh" but there you go. It's been crazy busy and chaotic at work with no signs of slowing down in any way. I've had some jewelry ideas that I've been percolating but by dinner and house pick, it's just too late for any studio time.
I did invest in an awesome metalsmithing book that I think will be bedtime reading for tonight. I think some of it might be a little over my head but I'm giving it a go.
Also, I got confirmation for visiting the Neon Graveyard on the Vegas trip. Woo hoo!
Posted by Amy Huff at Wednesday, September 10, 2008 1 comment: 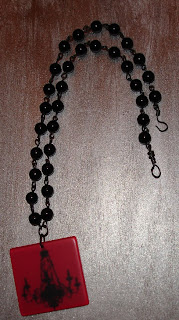 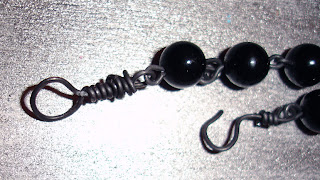 I love chandeliers and was thrilled to see this pendant at Michael's. I wanted to keep it simple so I had the black stone beads and just used the annealed steel (I love the black on black scheme with wire and bead) to make the chain and closure. I think I'm getting better at these closures and the wire wrapping. I really have been trying to use some of my existing supplies and just supplementing with a few things here and there. So far so good.
My next plan is to use several pieces to make a charm necklace type thing. It's inspired by Deryn Mentock, Kelly Snelling and Amy Hanna . It's still in the percolating stage so I'll keep you updated as it develops.
Posted by Amy Huff at Sunday, September 07, 2008 1 comment: 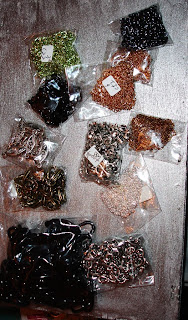 I got some fun goodies in the mail. I love all the yummy silvers, pinks, and greens in addition to the regular chains. I'm not sure what I'm going to do with them but I think I've got some pendants and charms that are just waiting for these babies. :)
I've just finished reading Kat Richardson's latest book and it was awesome! It's an urban fantasy but she combines folklore, history and fiction beautifully. I highly recommend this one.
Posted by Amy Huff at Saturday, September 06, 2008 No comments: 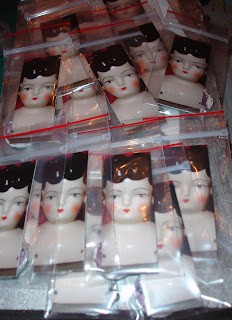 These went out in the mail for the Alphabet Swap I'm participating in and I have to say that it was pretty cute to see all of these little moo cards bagged up and ready to head out. The charms will be posted once everyone receives them but I will give a hint that I had to buy a drill press and enlist the husband's aid in their creation but I think it was worth it.
The weather here is overcast and in the 70's. This is not Texas, it's heaven!
Posted by Amy Huff at Wednesday, September 03, 2008 No comments: 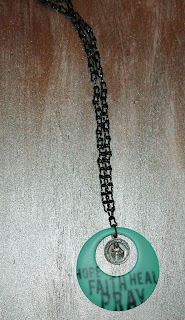 This is a quickie necklace I made for my friend Suzanne. She's one of my favorite people. She has a knack for finding the good in almost everything and everyone and while that could be annoying if she wasn't also kind of snarky and sarcastic. Definitely one of my favorite people. I found these great pendants at Michael's and I knew this one was her. I added in a vintage Lady of Fatima charm just for good measure.
Posted by Amy Huff at Tuesday, September 02, 2008 No comments: 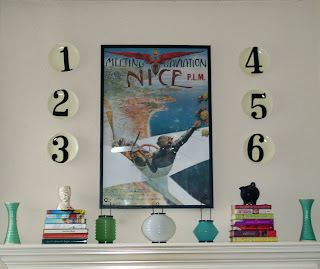 We also picked up a couple of dining room chairs from West Elm. The others are on back order so we can finally eat at a table - if we so choose to - mostly it finishes off the dining room/library/bar room that has become our dining room. Actually, I really like it. It feels slightly pub-ish. We also got a drill press but I'm not ready to display those pics just yet.
On the art front, this is a piece I made this weekend and am absurdly excited that I had all of these elements already. Typically I go and buy a zillion beads, wire, etc then end up using mostly things I have. Not this time! I gathered all my elements and made short work of them while catching up on season 2.5 of Battlestar Galactica. I watch in my studio since my husband can't stand even hearing anything related to the show. He also only liked Doctor Who when Martha was on so I'm back to square one there as well. Anyway, I love this necklace with the combination of pottery beads, quartz and metal piece all brought together with steel wire. Where has this wire been all my life? :) 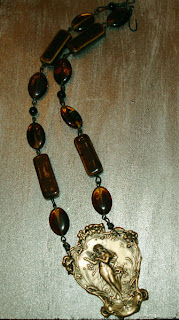 Now, I'm headed out to the Knox/Henderson area (almost downtown part of Dallas with some funky shops and larger stores like Crate and Barrel, Z Gallerie, etc) for some patio time at the Cafe Toulouse - maybe some Mac & Cheese as well. Hope you guys had an awesome Labor Day weekend.
Happy Monday!
Posted by Amy Huff at Monday, September 01, 2008 1 comment: